Carrie Repking received a BA degree at UC Santa Barbara as an Fine Arts Major with an emphasis on painting in 1972.  Moving from representational work to more abstract art in teacher and artist Carl Provder's workshops in the 1980's was exciting and freeing to her: she could do whatever she wanted, even if the result was not great art.  Weekly sessions in a life drawing group with friends helped her learn to draw faster and with more expression.

For the last twenty years, she has enjoyed working with collage: mixing paint, paper, photos and found objects to form abstract designs on canvas and paper.  She likes to incorporate figures and people in her collages and have started to do a whole series in that direction.

She has won awards in numerous juried shows in San Diego County, CA.  She set up an all figure show in Pacific Beach and had a solo figure show in Escondido at Gallery 451. She has had three solo shows in Fallbrook, CA, the latest one at the Brandon Gallery.  For six years she exhibited at The Pinnell Gallery in Fallbrook with the art group, "ArtSpeaks." 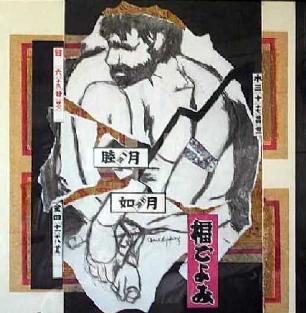